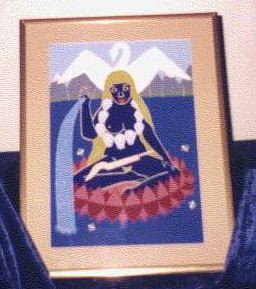 Goddess Kali as painted by the author of this article in 1993.

The word ferment refers to a process of decay that is also a creative process. What if such a process is at work, not only in the compost heap and the wine vat and the cheese cellar, but throughout the cosmos? What if it has something to do with the very beginning of life here on Earth, and with life on other worlds as well?

Last September I wrote an article about different ways of picturing how life got started: Clockmaker, casino, or crystallization? As I mentioned then, the term "self-organization" has been used by the biologist Stuart Kauffman to describe a creative dynamic that creates vortexes and crystals, as well as living things. Yet this creative dynamic also has something to do with decay: with free energy being used up. A vortex forms in flowing water; and water always flows downwards...

I want to write further about this decay, this downward flowing... About the modern scientific notion of "entropy", and what it has to do with the vision of Kālī as the sacrificial Goddess, the destroyer who is also the mother...

I first encountered the notion of entropy when I was a school-child: a primary school-child, if I remember correctly. I liked reading books about science, and in one of them (an illustrated book which I think was published by the American company Time-Life) I found a couple of pages about "heat death of the universe".

The information I received then, was largely true, but one-sided. The flow towards entropy can be thought of as the slow death of the universe, at least of the universe as we know it. (Although there is still scientific debate about whether the universe is likely to end that way or some other way or continue in some form. See the Wikipedia page Ultimate Fate of the Universe.)

The Second Law of Thermodynamics

The concept of entropy is related to the Second Law of Thermodynamics, which specifies that heat flows from hot objects to cold ones. A hot object tends to cool down until it reaches the same temperature as its surroundings; on the other hand, an object cooler than its surroundings will tend to become warmer, as heat flows into it.

It is certainly possible to make objects become warmer or cooler than their surroundings: we do that every time we use a stove or a fridge. But to do that you have to put additional energy into the system: e.g. a stove has to be powered by electricity or gas or a wood fire. When the energy source is removed from a stove, the stove will immediately start to cool. When the energy source is removed from a freezer, the freezer will start to thaw.

The same principle applies not only to heat as such, but also to other forms of energy, all of which can be converted into heat.

The emergence and development of life has often been compared to an ascent: Climbing Mount Improbable is the title of a book on the subject by Richard Dawkins. Quite recently, however, a group of scientists have put forward a model of the beginning of life on Earth which is based on thermodynamics; and this new model compares the process to "water flowing downhill". These scientists are the physicists James Trefil, the biologist Harold Morowitz, and the physicist and mathematician Eric Smith. Their article The Origin of Life in the publication American Scientist can be read on the net.

Water above sea level contains has a higher level of potential energy (energy due to position), than does water at sea level. When the water flows downhill, the energy is released and entropy increases. Water moving down to sea level is something that happens by itself, like a hot object cooling to the temperature of its surroundings.

On the other hand, the water will only go uphill if something or someone is giving it energy. For instance, a human being can give energy to a small amount of water by putting the water in a container and carrying it up a slope. Or by using a pump. A more frequent way of water getting uphill, is that the Sun gives it energy: heat flowing from the Sun causes evaporation of water from the sea, and some of the resulting water vapour later condenses as rain or snow and forms rivers and lakes in the mountains.

If we picture a lake of water in the highlands, dammed up by natural obstacles, it is not immediately obvious how that water can get to the sea. There is a very good chance that it will, though, unless someone drinks it first, or the Sun dries it up. If neither of those things happen, what is likely to occur? The water level will increase until the water has risen high enough to start overflowing the solid material that is blocking it. When it begins to overflow, it creates a channel that gradually becomes deeper and wider.

Similarly, the origin of life... According to the "flowing downhill" theory, life on Earth emerged out of a cocktail of substances in which chemical energy built up, like the water-level in a natural dam, until the equivalent of a channel appeared. The channel was a chemical pathway — a sequence of reactions that took the cocktail to a lower level of chemical energy.

What did this natural chemistry have to do with life? Well, the chemical pathway that formed involved catalysts — molecules, and combinations of molecules, which induce other substances to let go of their pent-up chemical energy... The catalysts themselves were high in energy, and remained high in energy, thanks to the reactions going on around them, the reactions which they themselves made possible. They were somewhat like the standing waves that can appear in water flowing over an irregular surface — patches where the water (even while flowing downhill) seems to defy gravity...

The catalysts clumped together in little conglomerations, which became the first (microscopic) living things.

Living things on other worlds, such as Saturn's moon Titan, may be structurally and chemically very different from those on Earth.

However (unless mainstream cosmology is seriously wrong), the same principles of thermodynamics operate on Titan as on Earth. Life there, as here, will involve a flow of energy in thermodynamically favoured directions — from hotter places to colder, from the high places to the low.

Like the organisms in a compost heap here on Earth, life-forms in the methane lakes of Saturn's biggest moon are expected to spend their time getting stuff to decay — digesting energy-rich substances down to a chemical state that contains less energy.

The exciting thing: aspects of Titan's atmospheric chemistry suggest that stuff really is decaying there — stuff that couldn't easily decay by itself. If living things aren't doing the damage, what is?

Should we be surprised if the first real evidence of extraterrestrial life turns out not to be some constructed object — like a canal, or a flying saucer, or a radio transmitter — but instead a chemical signature of decomposition?

A question about sacrifice

Is it possible that all the world's myths and rituals of sacrifice — however primitive or cruel they may be — express early intuitions of an important reality which science today is rediscovering?

Re: Entropy: the deadly yet life-giving waterfall

yes , interesting ideas in your article .certainly not quite how I imagined The Sword of The Goddess but is interesting idea . I first encountered the idea of Entropy in a Book by Paul Davies called The Cosmic Blueprint .This was only about five years ago so not quite as long as you .I guess the line from T . S . Eliot ' s Love Song of J . Alfred Prufrock springs to mind , " This is the way the World ends , this is the way The World ends , not with a band but a whimper. " springs to mind .Also I think the term Big Bang is possibly un - helpfull , as it 's become increasingly evident that it ' s more like an expansion . I also have a problem , in a sense , with Big Bang , in that it still kind off follows the idea of a Creation ,( ie linear time ) and therefore begs the question , what caused it . But I digress , I ' m talking here about creation , rather than destruction, though it ' s clear to me , based on your article that if the Cosmos will end in a whimper more than bang it bears out my belief that the begining of the Cosmos is a great expansion rather than a bang .Therefore it follows that it ' s possible that it will end the same way…

Many thanks for your thoughts about the article…

Regarding entropy and the quote from T.S.Eliot... The principle of increasing entropy may mean that the world will end with a whimper rather than a bang... On the other hand, as I understand it, the same principle of increasing entropy is involved when something does go bang - e.g. if a glass vessel falls to the ground and shatters, or if energy is released in a chemical or nuclear explosion, or in an astronomical event like a supernova... Exactly how this relates to the "Big Bang" and the idea of a Creation is another question... Some cosmologists use the term "inflation" to describe a period of very rapid expansion in the early history of the universe. And I understand there are theories which involve stuff happening before the "Big Bang".

RE: Entropy: the deadly yet life-giving waterfall

This is Flanders and Swann on the First and Second Laws of Thermodynamics (not my animation!):

Re: Entropy: the deadly yet life-giving waterfall

Regarding entropy and the quote from T.S.Eliot . . . I was watching a doco which made me go and check up on some stuff on New Scientist site regarding Dark Matter and dark Energy . As you probably know , about 80 % of the Universe is missing . One theory is that this is stuff which is yet to be manifest , which is interesting . Another thing which I found interesting was that as the Universe expanded it caused masses of rips in the fabric of Space . This Rip could conceivably be a " portal " , as it were to parallel dimensions . Theoretical Mathematics has predicted that parallel Universes could have occurred during the formation of the " Prima Materia " so to speak , moments after " Big bang "It is through these " Portals " that forces we call God/dess come / speak to us …