A simple statement about complex functions
Reflections on Euler's equation

A year or so ago I wrote an article about the search for simplicity in various fields — including poetry, science, philosophy, and religion.

I mentioned as an example the celebrated mathematical statement known as "Euler's equation" or "Euler's identity":

It's a statement that is written very simply, but does require effort to understand, unless you are already familiar with the concepts surrounding it.

The effort we take to make sense of the equation may reward us with a better understanding of what sort of simplicity it represents.

Explanation of the symbols

The immediate source of Euler's Equation is a more general statement known as Euler's Formula,

Euler's Formula was first published in its current form in 1748 by the Swiss mathematician Leonhard Euler.

A paradox and a jewel?

The nineteenth century American mathematician and philosopher Benjamin Peirce described the Equation as "absolutely paradoxical". Readers of the journal Mathematical Intelligencer in 1990 voted it the "most beautiful theorem in mathematics". The twentieth century physicist Robert Feinman called Euler's Formula "our jewel".

According of Edward Kasner, author of the book Mathematics and the Imagination: "It appeals equally to the mystic, the scientist, the philosopher, the mathematician. For each it has its own meaning."

Why I found it weird and intriguing

It was in Kasner's fascinating book that I first encountered Euler's equation many years ago, when I was still going to school. Kasner presents the equation, without explanation, at the end of a chapter about irrational and imaginary numbers. I found it weird and intriguing, but it was several decades before I looked into it further...

The number i, the square root of minus one, is an imaginary number, as distinct from the real numbers (positive numbers, negative numbers and zero). It cannot be written as a decimal, even approximately. 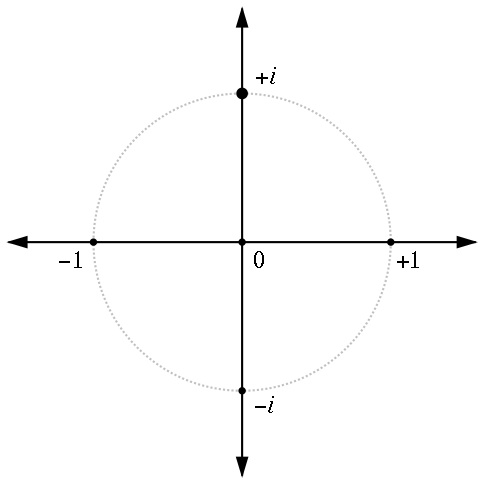 Pi, e, and i are instances of the way the concept of number has gradually been extended. The number zero is another instance of this. The concept of zero as a number emerged in India, where it was denoted by the Sanskrit term śūnya (void). The mathematician Brahmagupta (seventh century CE) was the first to formulate rules for equations containing zero.

If we entertain the idea of a number called i, whose square is minus one, then familiar rules of calculation, such as the associative principle, can be used to work out (for instance) that

and that in fact every negative number has a square root which is i multiplied by a real number.

An expression like e i π still looks strange though. Taking the everyday definition of expressions like a b or x y, are we being asked to imagine a product of the form

where the total number of all these e's happens to be pi times i ?? How can that mean anything?

Why it makes sense

There are other definitions of expressions like a b or x y apart from the repeated multiplication definition. For instance, a definition can be based on the relations a b.a c = a b+c and (a b) c = a b.c. Another way of defining these expressions is by beginning with the natural exponential function e x.

The natural exponential function e x or exp (x) can be defined in terms of the following two characteristics:

Expressed as a graph, the natural exponential function is a rising curve whose slope (gradient) at any given point is always equal to its height (vertical coordinate) at that point. 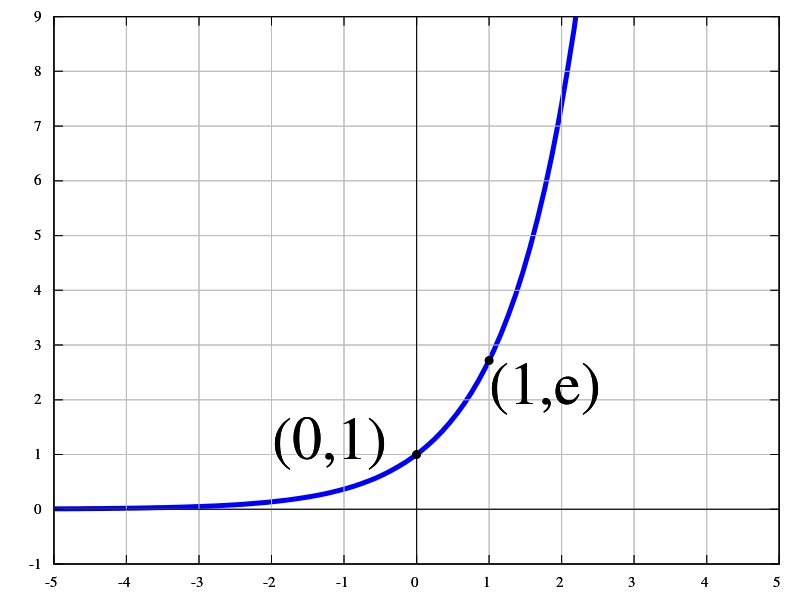 The mathematics of the natural exponential function is relevant to a range of material situations involving growth, from economics (compound interest), to biology (growth of a population of organisms).

Now let's have a look at the function e kx, where x is the input of the function and k is a constant. At what rate does the output now change per change in the input x?

What we wanted to know was the rate of change of e kx per change in x. So the result has to be scaled by a factor of k. Thus...

(This formula can be used to work out the rates of change for functions such as 2 x or 10 x with the help of the natural logarithm.)

In the case where k equals -1, the function e kx can be written e-x. In this case, the slope of the curve that graphs the function is always negative (downwards), because it is -1 times the height. Whereas the function ex is about growth, the function e-x is about decay. For instance, in nuclear physics it is applicable to the way a radioactive substance diminishes in quantity over time.

Exponential growth gets faster and faster. Exponential decay gets slower and slower.

The wave functions: sine and cosine

The concept of sine, like the concept of zero as a number, comes from India's mathematical literature in Sanskrit, and reached Europe via the Arab world.

The sine function can be defined in terms of a right angle triangle (opposite over hypotenuse) or in terms of a circle (vertical coordinate of a point on a circle of unit radius).

Sine can also be thought of as "acceleration opposite to your current position"(a quote from the website Better Explained, Kalid Azad's intuitive approach to mathematical concepts).

Sine is the function

Cosine can alternatively be defined without reference to sine, as the function which has the following characteristics

The graph of the sine function is a rising and falling curve called the sine wave, which repeats with a period of 2 π. The graph of cosine looks like the graph of sine, but shifted horizontally.

The sine wave is an important concept in the study of oscillating systems, both natural and artificial; for instance, in the physics of sound and in electronics. It is also relevant to the study of waves in water.

Comparing the characteristics of natural exponential function with sine and cosine, such as output and slope when the input is zero, there is clearly stuff in common.

Remember, we defined the exponential as the function

From which it follows that

Viewed this way, sine and cosine start to look like a version of the exponential function which has fissioned into two functions, the second derivatives of which have been transformed by a factor of minus one.

Can the relationship between the exponential function and the sine and cosine functions be captured in a mathematical formula, with the help of the number i?

An exponential function which behaves like sine and cosine

Looking at the second derivative of e kx...

What happens if k is the number i, the square root of minus one?

So now we have an exponential function whose output times -1 is the second derivative of the function. That means the output's acceleration is opposite to its current position. Just like sine and cosine...

The function "cos + i sine"

If we consider the function cos x + i sin x, sometimes called cis x... Its first derivative works out as the output of the original function multiplied by i.

The output of cis x, when the input is zero, is the same as for cos x, namely 1. The characteristics of cis x can be summarised as

Another characteristic, which follows logically, is

The variable in these equations doesn't have to be written "x ". In principle, any letter could be used. In practice, the Greek letters "θ" (theta)" or "φ " (phi)" are frequent alternatives. So the just-mentioned equation is often written

φ or θ is used, because these symbols are by convention associated with angles. The cis function (and therefore also the exponential function equivalent to it) can be represented on the complex plane by showing its input as an angle rather than a linear measure.

e i φ with input variable φ shown as an angle

What sort of simplicity does Euler's equation represent?

There is more than one sort of simplicity.

The simplicity of Euler's identity is simplicity that works with complication. It is simple but not simplistic. In this respect I consider it a model for the simplicity worth searching for in other fields, as well as in mathematics.

Natural logarithm and power series (or Taylor series) are two concepts often mentioned in discussions about Euler's equation. While they are interesting and relevant, they are not strictly necessary in order to see why the equation makes sense.

Power series are a way the exponential, sine and cosine functions can be calculated, or indeed defined:

The fact that these power series fit together so neatly may look like a very lucky chance, but is actually a natural consequence of the function characteristics we looked at earlier, namely the output of each function when its input is zero, and the way its output changes as the input changes.

It's really very interesting. Though I don't know anything about maths, and remembers vaguely the exponential, algorithims etc. but I liked the way you simplified. In Maths there are many theories which is paradoxical in nature.

Great to hear from you... I looked around your site to refresh my memory and chanced across your article on Euler's equation - very clearly explained.

Well, I have a natural log equation for you (see below)... 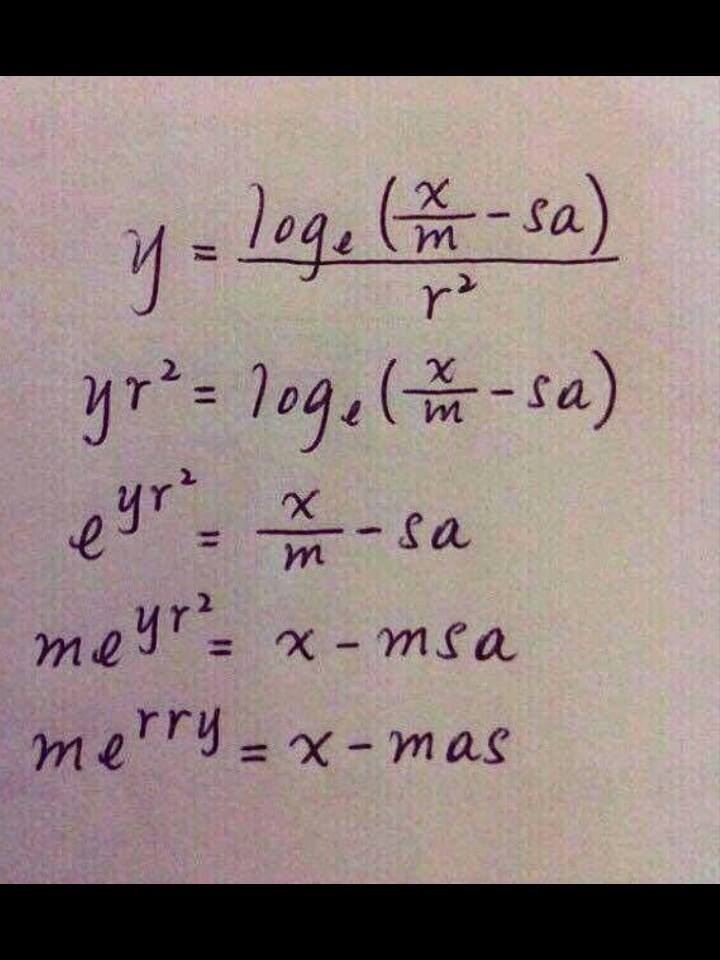