The planet Venus
beyond demonisation, towards discovery

"... viewed in a different way, the problem with Venus is merely that the ground level is too far below the one atmosphere level." 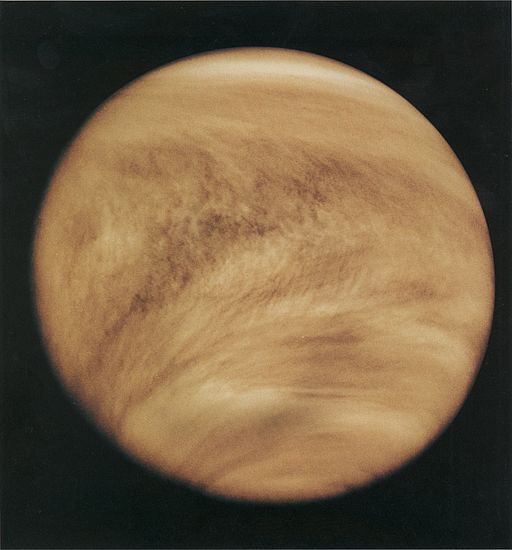 The planet Venus has often been compared to Hell, for instance by Carl Sagan. Yet the concept of a future human colony floating high in the atmosphere of Venus has been seriously proposed by scientists and engineers, and is right now gaining major public interest online.

A PBS video on the topic has had 1.3 million views on Youtube since March 2015. Two months ago, I wrote a few paragraphs for the question-and-answer website Quora, replying to the question "Is a manned mission to Venus possible", and my answer has already received over 30 thousand page views.

How then are views about Venus changing? And what do our changing views about this planet tell us about ourselves?

After the Moon, Venus is the brightest object in Earth's night sky. The planet always appears close to the horizon, around sunset or sunrise, and has therefore been called the "evening star" and the "morning star". Ancient civilisations associated the planet with goddesses of eros: Sumerian Inanna, Babylonian Ishtar, the Greek Aphrodite, and the Roman goddess Venus.

When Venus appeared in the morning, before sunrise, the planet was sometimes called Lucifer, the light-bearer, which in Christianity became a name of the Devil.

In India, the planet Venus is identified with the masculine figure Śukra, the teacher of the asuras (enemies of the gods). There also seems to be an association between this planet and the goddess Tārā, who is important in Tibetan Buddhism as well as in Śākta traditions. (See "Tara - origins and development" by Dharmachari Purna in the Western Buddhist Review.)

When the first probes reached the planet

When the first interplanetary space probes reached Venus in the early sixties, human understanding of the planet was revolutionised.

Before that, we knew how Venus moves around the Sun, and how big it is. We knew that it is the closest planet to Earth, and the most similar in size — Earth's sister planet. We also knew that it is covered with clouds.

Then the news came back from the Soviet Venera and American Mariner space probes. No oceans, no jungles. Instead, a surface hot enough to melt lead, with atmospheric pressure 90 times the pressure at sea level on Earth. And clouds which contain more sulfuric acid than water.

That was when terms like "hell world" and "Earth's evil sister" became standard descriptions of the planet Venus. Perhaps understandably,,,

Although it may be worth reflecting about the fact that temperatures and pressures in the Sun are much higher than on Venus, yet few would describe the Sun as hellish or evil.

Are these terms used because we expected Venus to be much more like Earth, and we were disappointed?

It's true that strong acids can harm us humans. Yet acids are also part of our daily lives. Cars and buses have sulfuric acid in their batteries, after all. In the stomachs of humans and other animals there is another strong acid, hydrochloric, which we use to break down our food.

Maybe that association of acid with digestion is part of the reason that planet Venus has been so vilified.

Do we semiconsciously see the planet as a devouring monster, a ravenous she-creature who will digest us with the acids in her belly if we come too close?

The most common online picture of Venus shows the planet as a garish orange-brown-yellow circle with lighter and darker areas but no clouds. This picture is based on radar mapping of Venus' surface by the NASA probe Magellan, which went into orbit around Venus. The colouring is not from the radar, but is based on close-up photos of the surface from the Soviet Venera probes.

Although that picture doesn't show Venus' atmosphere and clouds, it is sometimes placed side by side with a photo of Earth as seen from space, complete with cloud banks. It is rather like placing an x-ray of someone's skeleton next to an ordinary photograph of someone else...

Another way of looking at Venus and Earth

The comparison between Venus and Earth looks different if we don't just look at conditions on the surfaces of the two planets, but also conditions below and above the surface.

Around 50 to 55 kilometres up from the surface of Venus there is a level of the atmosphere which has been called the temperate zone.

At an altitude of 50 km above the surface of Venus, the pressure is 1.066 atmospheres, i.e. 1.066 times pressure on Earth at sea level. Temperature is 75 degrees Celsius: still hot by Earth standards, but no longer hot enough to melt lead. It's not even hot enough to boil water.

At an altitude of 55 kilometres, the temperature goes down to a human-friendly 27 degrees Celsius, and pressure is 0.53 atmospheres. That's still substantially more than the air pressure at the peak of Mount Everest, conditions the human body can handle without a pressure suit.

Concept of a floating base

The idea of establishing a floating station in the atmosphere of Venus was raised in 1971, in an article by the Soviet engineer S. Zhitomirsky in the publication Technica Molodezhi (Technology for Youth).

Such a station would float like a lighter-than-air balloon or airship, but would not have to use hydrogen or helium, since breathable air itself could provide buoyancy in Venus' atmosphere.

In 1985, the Soviet/European Vega mission succeeded in inserting crewless balloons into Venus' atmosphere by parachute.

More recently, NASA scientist Geoffrey Landis has written about Venus atmosphere colonisation, and a NASA team has competed a feasibility study of a series of airship missions, initially robotic and later crewed. The project is called HAVOC, which stands for High Altitude Venus Operations Concept. A video simulation of one of the missions can be viewed online.

Comparison with the International Space Station

Compared to the near-vacuum environment which the International Space Station operates in, Venus' temperate zone is in several ways more hospitable:

Energy from the Sun is plentiful, while the atmosphere above the floating Venus station will still be thick enough to provide protection against cosmic rays.

It's true that there is sulfuric acid in Venus atmosphere, even in the temperate zone. The outer walls and solar panels of a floating station will have to be made of acid-proof substances.

A human being walking outside the protective walls, e.g. on a roof or balcony of the station, will need an acid-proof suit, as well as an oxygen supply. This gear will be simpler and less bulky than the pressurised suits needed for space-walks in Earth orbit, or for walking on the Moon, or for walking on Mars.

Data from the NASA space probe Galileo and the ESA probe Venus Express suggests that two elevated regions in the southern hemisphere of Venus have a different composition from the rest of the surface. It is hypothesised that these regions may be ancient continents, which were surrounded by an ocean of water when the solar system was younger and the Sun less bright.

This is one of the questions which future crewed or uncrewed missions may resolve.

Could Venus have its own living things?

Several of the factors which make a floating station feasible in Venus'  temperate zone — the Earth-like temperature, useful elements in the surrounding atmosphere. available solar energy — are also potentially favourable to indigenous microscopic life there.

Chemical energy is available too, for the atmosphere of Venus is not in a state of chemical equilibrium. This is important because chemical energy is the easiest form of energy for living organisms to use. Plants and some sorts of microbes get their energy from light, but they do this by first converting the light energy into chemical energy in the form of sugars.

Venus' temperate zone also contains something else which all known life requires: liquid water, although the water is highly acidic.

Here on Earth, microbes have been found which not only survive in clouds, but complete their life cycle there. (Unlike birds, which have to land to lay their eggs.) Earth also has microbes, such as the genus Picrophilus, which not only flourish in a strongly acidic solution, a mixture of sulfuric acid and water, but actually require the acid to stay alive.

Compared to the liquid which Picrophilus lives in, the clouds of Venus contain more sulfuric acid and less water. However, as planetary scientist Dave Grinspoon has observed: "The low pH limit of Terrestrial life is not known." In other words, we don't yet know at what level of acidity (if any) earth-like life would become impossible.

It may happen that the first place we find extraterrestrial organisms will be neither Mars nor Europa, but the planet nearest our own.

Clouds of another sort

After the early space probes sent information from beneath the clouds of Venus, some of us Earthlings thought we knew quite enough about the planet. Now we're starting to realise how much we still have to learn about our sister world. To a large extent, she's remained hidden from us behind clouds of another sort — the clouds of our own negativity, our own readiness to demonise... Clouds which may at last be beginning to part...

That’s quite good, a Choilm! - and I say that as a physicist. You should write things like this more often.

P.S. I take it you know that the proper adjectives for Venus are Venerean and (gasp!) Venereal?

Glad you like the article. It's a topic which involves both of the two cultures, science and humanities.

Yes, "venereal" and "venerean" are the logical counterparts of "martial" and "martian", or "jovial" and "jovian". The term "venereal disease" was originally a euphemism — instead of referring more bluntly to sexual transmission, the idea was veiled in classical allusion. It's another aspect of the way we earthlings (or should I say "terrestrians"?)  have associated the name of Venus with negativity and harm...

Venus has been associated with Love. So from the symbolic point of view, could the difference between conditions at ground level and further up mean that our concept of Love must be "lifted" to become livable ?

Or, that the liveable space is a "golden mean", neither too low nor too high?

The article was very interesting and very timely also. When the whole world is searching for a habitable area, you have wrote about a planet for which no interest has yet been generated.

As an Indian and a Hindu, I am just throwing some light on Sukra. The god 'Sukra' is the teacher of the 'rakshas'. Both god and rakshas descended from the same 'Prajapati'. The gods went on to rule the heaven while the 'rakshas' or the guardians went to rule the underground. Though there have been enmity between the two but we have seen rakshas born from 'rishis'. Rishis are monks. Like the father of Ravana was a rishi. Ravana was himself the worshiper of 'Shiva' and wanted 'mukti' from the rings of life. So he chose a shortcut and got himself murdered by Ram,whom he knew was the Supreme himself, who will cure him of this life cycles.

Thanks again for this wonderful planet.

Glad you like what I wrote about Venus, and thank you for sharing your thoughts about Śukra and the guardians of the underworld. I remember seeing a comparison between the titans in classical Greek mythology and the asuras in Hinduism. Both titans and asuras are enemies of the gods, without being as uniformly wicked as devils in Christianity.